In my lifetime, every election has seen more and more (mostly) white, poor-to-middle class Americans buying into the GOP’s big lies and voting against their own self-interest. They latch onto the fear of “the other” (minorities, immigrants, women, LGBTQ, you name it) being peddled in place of honest policy by those who are deep in the caverous pockets of the 1%, and despite mountains of evidence to the contrary, refuse to let go.

With the Iowa caucuses just around the corner, we here at Off the Rails are going to try to combat the Big Lies with – shock! – a little truth. We may be preaching to the choir, but always better to light a match than simply curse the darkness.

For starters, a brief video by Robert Reich, economist, former Sec. of Labor under President Clinton, and all round progressive guy.

This is truth, verifiable economic truth. No more, no less. Listen and remember when you go to the polls.

The Important and Insignificant
By Jennifer Kiley

Which Side Are You On? – Pete Seeger

Summer winds down. The nights grow a little longer and brisker, the air fills with the sweet scent of golden rod and apple. Labor Day is upon us. Over potato salad and various grilled goodies, we take a day to commemorate the long history of labor and unions in this country. In theory.

Couple that with the fact that people like Scott Walker and his Koch brother overlords are trying to roll all Union progress back to the Stone Age and Labor Day is one massive disconnect in the American psyche.

Today, there are generations of young people buying into the Unions-as-boogey-men-of-the-middle-class BS spewed by the GOP. (Especially the NEA – republican “family values” don’t extend to making sure children are well educated by properly trained and paid teachers.) It’s Fox and talk radio and the big lie told again and again, louder and louder, until it sticks.

Where is the truth to combat the falsehood? Sometimes it lies in art.

I am a fan of films, old and new; the good ones can be great teachers. I particularly enjoy the Turner Classic Movie Channel. TCM has a penchant for holiday theme marathons – weekends of war films for Memorial Day and Veterans Day are annual fare – so I was eager to see what they had planned for today in honor of Labor Day.

There was nothing. No Norma Rae 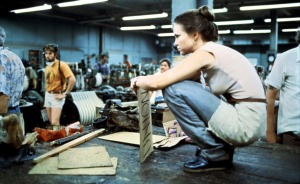 no On the Waterfront 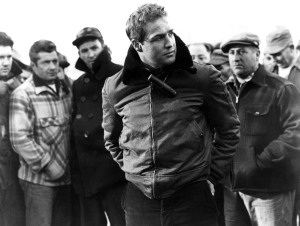 or The Molly Maguires.

Silkwood, 9 to 5, With These Hands, Brassed Off, Kinki Boots, Bread & Roses, Roger and Me, El Norte, 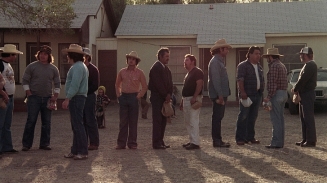 American Dream, The Efficiency Expert (to name but a few). Not even Grapes of Wrath or How Green Was My Valley. Nada. I even checked Netflix and other streaming stations. Aside from a few Criterion Collection gems, labor films are rarer than hen’s teeth lost under a blue moon.

You would think there never was a labor movement in this country. And that is just the way the right wing wants it.

This morning my inbox was flooded with e-mails from Walmart – yes, I’m sorry to say limited resources and options do drive me to Walmart on occasion – announcing a big sale (of course) “in honor of your hard work.”

No, they wouldn’t do that. Instead they want you to sweeten their bottom line with your hard-earned wages. Because, hey, the Walton family labor, too, and they deserve the fruits of those labors.

The George Baileys of the world are struggling to survive, but that’s just the way it is in an increasingly Mr. Potter world. The rich can never be rich enough. And that’s ok, because one day the 1% will deign to trickle down on the rest of us and we’ll be so very grateful they saved us from those nasty unions.

When it comes to workers and the Labor movement in this country, the cognitive dissonance clangs so hard it shakes your teeth loose. And it’s killing us: the working poor, the middle class, and soon even the 1%.

“Against overwhelming odds, the men and women of the labor movement changed society for the better. If you’ve ever enjoyed a paid vacation, a sick day, or a pension, they are the people to thank.”

And how better thank them than in song. So, raise a beer or lemonade and lift up your voice before it is too late.